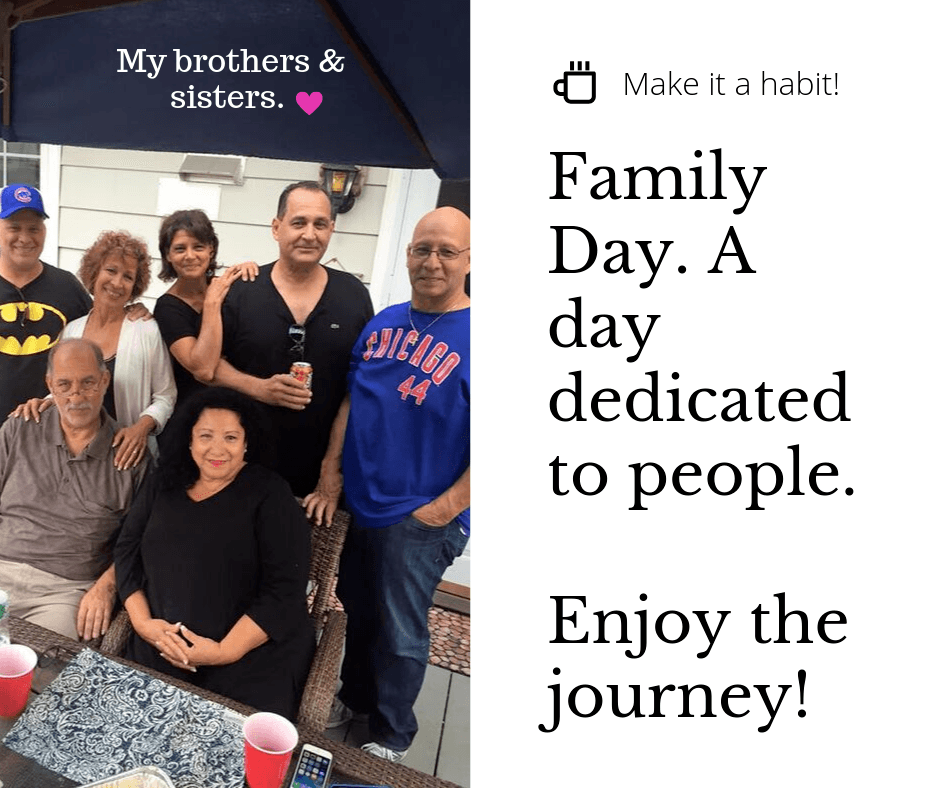 In my Tidy Tidy world. We have specific days set aside for things that have to get done. This way we’re not crazily fitting things into our week panicked trying to dodge one consequence of the other.

One of those days is called *”Family Day” this is a day set aside for people who matter to us most.

If we aren’t careful one day can blur into the next and before we know it… weeks, months and even years go by and we find we haven’t spent time with people we love, and that is really what matters to us most in the entire world to each person… it’s crazy how, if we don’t plan it, it just doesn’t happen.

So we have one day set aside a week, the specific day is different for everyone, it’s usually a Sunday, but any day works.

So we have one day set aside a week, the specific day is different for everyone, it’s usually a Sunday, but any day works.

On that day we make sure that we connect with people, we put everything else on hold and make it a priority, like going to work or taking a shower or getting to an important dr. appointment…the things that are non-negotiable.

Well this morning I was listening to “Red-Rose Speedway” a Paul McCarney album that came out in 1973.

I was fine until one song came on… It was “Single Pigeon” (you probably don’t know it, it wasn’t on the hit parade, but it is really a great song, you should listen to it) so anyway… the song is mostly played on the piano.

My brother John payed the piano in the house I grew up in all the time…  that song was one of the songs he would play, I had forgotten until the song came on…

While I was sitting here, in my kitchen working… tears just started streaming down my cheeks.

It was uncontrollable. It wasn’t sad, but it wasn’t happy either. I was flooded with emotion… maybe it was overwhelming love or just feeling the realness of a time that will never be again.

Everything came back to me. How much I loved and hated my life as a child…  but one thing is for sure, I loved my brothers and sisters and the home I grew up in, and the feeling of being a family under the same roof.

When my kids were little my husband and I did something we called “Family night” we had ice ream on top of a big old sesame street comforter on the living-room rug and watched Movies… For a long time it is was TGIF, the shows that ran in the late 80’s.. Remember that? Full House, Perfect Strangers, and I think Family matters… I don’t remember the third show… Well anyway, we often would play a board game before or instead of, but a very large bowl of ice cream or a pint of hagendas each was always a part of it.

I am so happy we did that with them… anyway here’s the thing.

Whatever life we’re living now, we’ll never get the time back again. Just like I would LOVE… OMG how I would LOVE to sit in that kitchen on Pennsylvania Avenue again with my father, or on his lap as he read me Brenda Starr from the funny papers, or listen to my brother casually play the Beatles or one of his own songs and sing in the living room before his friends came to pick him up, or write a message after answering the phone right next to it on the green and white wall paper… or watch my sister Maria put her make up on for what felt like HOURS before she went off to high school while I still lay in bed before I had to get up or thinking i was sneaking a cigarette in my bedroom listening to albums, laying close to the speaker, trying to learn the words of Bob Dylan songs… Sorry Frankie, Mike, Donnie and Tina, this would go on and on if I didn’t cut it somewhere.

Do this for me… take pictures of the every day… I don’t have one picture of John or my father at the piano, or our family nights,… We have lots of pictures now because of the ease of digital images and social media sharing, but the every day? Don’t forget to take pictures that, right now don’t seem like they are important…  Don’t share those, no-one else will get it. but in 20 years you’ll be sharing them on Throwback Thursday like they were unearthed treasures worth a million dollars. You’ll be happy you did.

Honestly. Take time for the life your living now. The mundane every day and celebrate it…. freeze a moment in time once a week to be with those who matter the most to you. Will you do that? Will you make it a new tradition? Let me know and send me pictures! Let’s create a movement!

So much Love to you!

*(This is something I learned from Pam Young and Peggy Jones in their book “Sidetracked Home Executives.)